When I was 13, I was selected by my teacher, Mr. Coates, to be one of two “school printers.”  We were presented with a wooden chest full of lead type and an Arab treadle printing press. (These days they wouldn’t allow school kids within a hundred yards of that thing). We learned to set type (backwards, of course) and discovered quads and leading (yes, the real thing not the virtual version). We printed tickets and posters for all of the school events and ate lunch with lead black fingers by the press.

I had a wonderful two years gaining printing experience before I was head-hunted by Mr. Lax to be one of his librarians. So now I was sorting books and handling the printed page en masse for the first time. I soon discovered that some book spines couldn’t be read because of some “clever” choice of font. My emotional reactions (small angry ones, in that case) made me take notice.

Several years later after I finished school, I joined the family printing business (proudly operating under the name “Graphic Reproductions”). The original logo artwork (which I wish I still had) was set by my dad a few of years before in Letraset “Brush Script.” I remember that choice of typeface being quite a big thing at the time. When I joined in 1974, I already thought it looked old fashioned, but what was the new kid in the business to do?

I took over the design of letterheads, business cards, and event cards. As long as the customer and I were happy, all was well. So now I got to experiment… sort of. Of course, customers had their own ideas. Builders liked the blocky fonts, plumbers the bendy ones, and far too many people wanted “Old English.” But it was freedom of sorts. The best times were driving in to Sheffield several times a week to “Andrews Stationery” to select some new sheet of Letraset dry transfer lettering. Everything was hand set in Letraset then, which was a wonderful way to learn about the individual fonts as each curve and edge was burnished down with a spent ballpoint pen. Claremount, Garamond, Univers SF, Arnold Bocklin. I remember Arnold Bocklin seemed to be used all over Sheffield in the late 70’s early 80’s, mostly by plumbers.

Then the reign of the “Athena” print and poster stores gave way to the clairity of “Habitat” and “Ikea” furnishings and the style magazines of the day were suddenly crisp and clean and beautiful. Large round typefaces covered pages with tiny fine-line sans serif text tucked tightly below. Wow. This was the future. I saw that the most amazing thing on the page was white space. And the way the type corralled that space could be beautiful. I realised that there was a case to be made for changing a word in a headline purely based on how its shape affected the space around it. Aggressive design; a dangerous path, but impressive if trodden carefully.

With the coming of computer-based typesetting, the number of font choices available to us has exploded. Hand scripts in particular are becoming heavily used (and to good effect when chosen carefully). They can be fun, even joyous; yet the best ones are still attractive and well-balanced.

Designing a font is no easy matter. Imagine you have 26 characters (besides the numbers and special characters), and these 26 characters must look like they belong beside each other in any order. Tricky.

When choosing our font for “odd guy art,” we spent several weeks sampling hundreds of possibilities before settling on “Hasty Pudding,” which we felt not only captured the quirky personality of our designs, but also worked well with our logo’s three closely-set words. The natural inclination of this font visually separates the three words even when we delete the spacing (as in the web address). This made it the perfect choice for us.

“Odd guy art” took part in two events: The local farmer’s market art show and the John Michael Kohler Arts Center’s “NOMO Expo.” We put in a total of 16 hours setting up, selling, mingling, sunning, and packing up. We both found it extremely satisfying to meet new people and to sell our merchandise on such a lovely weekend.

Our biggest thrill is when someone sees one of our designs and really “gets it.” It must be how a comedian feels when his audience responds with laughter. One woman in particular was laughing hard at our “Unlikely Events” shirts (those featuring mock historical events), and even though we couldn’t see her behind the shirt rack, we chuckled along with her. (And yes, she bought a shirt).

Here’s a picture of our new set-up. We added some vinyl lettering to our canopy (which held reasonably well) and stitched a banner featuring our “odd guy” so that we’d be seen from a distance. People found us, so we guess it worked.

At the Arts Center on Sunday, we were interviewed for the official event video. This photo shows the cameraperson setting up at our booth prior to the interview. 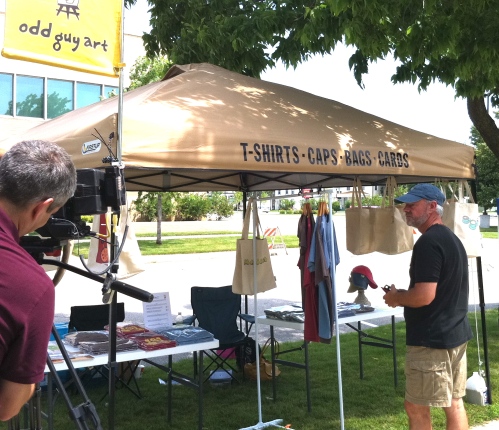 Setting up to be interviewed.

After the events were through, we went out for a nice Thai dinner, and then Marie fell into a deep slumber that lasted 14 hours. Seriously.

We look forward to meeting more of you either in person or via the web. Drop us a line. Respond to this blog. Or just email and say hello. People are our favorite species.

Now that we’ve had a couple of great experiences selling our shirts face-to-face, we are excited about this weekend’s double-header: Our local farmer’s market on Saturday and our downtown art center’s “NOMO Expo” on Sunday (“NOMO” stands for “Non-Motorized,” as in walking and biking promotion). When we get to meet you guys in person, we are satisfied right down to our toes.

So in an attempt to catch your eye, we’re pimping our canopy.

We’ve applied some vinyl lettering to the overhang, spelling out our wares. We thought this might help you recognize us from a distance. 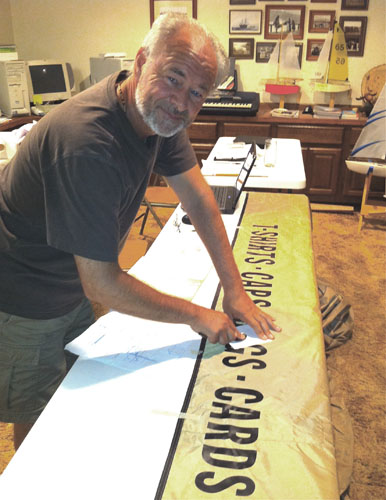 Graham burnishes our vinyl lettering onto our canopy. Will it stay on?

And as I write, Graham is building a frame out of PVC pipe so that I can sew an “odd guy art” banner this evening (featuring our logo) and mount it on the frame. We purchased some yellow canvas yesterday, which I already know takes opaque iron-on transfers very well, so after the sewing part is done, I’ll print out our logo and iron that baby on.

After that, I’ll try to show some restraint and let our products speak for themselves (“Less is more” and all that). We have a hanging rack to display some of our shirts; the rest we lay on tables, folded and packaged. Our bags are hung around the canopy, while caps and cards are displayed on tables.

The only thing left is YOU:). Hope to see you this weekend!

I am very happy to have been able to participate in a novel and important project; the “Small Works Project” by the Sheboygan Visual Artists. Over the last few months, SVA has provided as many as three hundred 8″x10″ canvases. Local artists have used these canvases to create works of art of all types and then donated them back to SVA.

Tickets were then sold at $25 each, and were randomly assigned to the individual canvases. The money raised will fund an “Art in the Parks” program which will send SVA artists into parks, playgrounds, and other public places this summer to offer arts workshops for kids, teens, and adults.

We at “odd guy art” feel that this is a great cause. Time was tight for us, so I volunteered to be part of the project. I chose to work in acrylics and create what I call a megalithic landscape. I have a small series of these paintings which feature ancient standing stones in British landscapes. The scene I painted for this project is of two standing stones which are known as “Giants Graves.” These stones are the remains of a Bronze Age cairn circle near Kirkstanton in Cumbria, England.  Scotland, Wales, England, Ireland, and the other islands of the UK have many megalithic sites still standing.

I have no idea who ended up with my painting, but I hope that whoever it is will enjoy it. Even more important is that the “Small Works Project” has been a great success.

All content and images;
Copyright © 2010 by Hetzel and McAllister. All rights reserved.